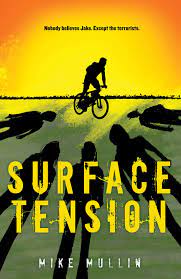 Surface Tension by Mike Mullin is told from the main perspective of a 17-year-old boy named Jake. Jake loves biking and witnessed an act of terrorism, causing a bunch of no good assassins to try and kill him, one of them being Betsy, the lead terrorist’s daughter. But when he brings up these theories about being targeted to his mother, she blames them on the head injury he received on the first failed attempt of his murder.  Personally, I liked the book. Some of the characters had fun, quirky personalities which added an element of humor. However, it was not my favorite read, and I most likely would not want to read it again. However, I am hoping there is a sequel because I am not okay with the way this story ended.