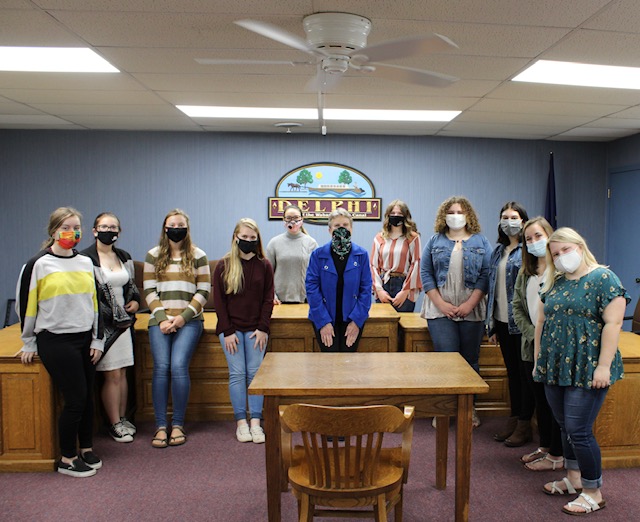 Parnassus crew with Mayor Anita Werling at the mayor’s office.

I thought I was going to be a nurse technician. Then in college I majored in English and minored in psychology, worked in a library for a year or two, and then worked in administrative publishing for most of my life.

I enjoyed art, and still do, and I also enjoyed history.

I was always in musical programs. I was in band and orchestra. We had an all city band and orchestra and I was involved in that. I played the flute and sometimes now play soprano saxophone. I was also in the National Honor Society and those types of programs as well.

I would say Friday is one of my favorites because it’s the end of the week and I know I’m going to maybe have a couple of days off. Really I think every dday that you wake up and are able to get up and do something exciting and be involved in your community is a great day, so I’d have to answer it that way.

The one time I really got into trouble we were at an all city band rehearsal at another school. It was a rival school. We had a football game coming up and they had posters up on the wall. Now I had just been to art class so I had these pencils and drawing tools in my satchel. I don’t know what happened,  but somehow they came out and something got written on the poster for the other school. Golly did I get in trouble! But since I wasn’t typically a troublemaker, it wasn’t too drastic. And I did have to apologize to the principal of the school.