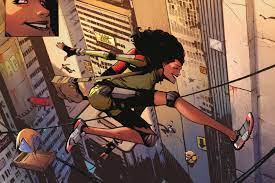 Skyward is a graphic novel written by Joe Henderson with illustrations by Lee Garbett and illustrations colored by Antonio Fabela. The book starts out like any normal day would, but that quickly changes when gravity begins to become less of a force. This day became a historical event called G-Day that caused many deaths as people lost control of where they floated, some hitting cars and others floating as high as they could. However, humanity continues to adapt. In fact, our main character, Willa Fowler, born just shortly before G-Day, loves the zero gravity and loves flying through the air. However, her dad does not. He is one the many who lost someone important to them on G-Day, his wife and Willa’s mother. Now he has not left the apartment since. But he has a plan to bring gravity back, and Willa gets tangled up in it. It’s a risky game, and at any moment it could all end for them. I thought the graphics and storyline were really thought out and found it a quick and easy read. (3.93/5 stars on Goodreads)