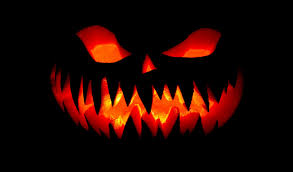 1st place
Monster in the Fog
by Austin Griffis
It was the night of Halloween, 1995. It was a foggy night perfect for the night of scares. The streets just started to crowd with kids craving for their bags to be filled to the brim with candy. But this story is not about them. It’s about one group of friends who were about to have their final Halloween.

John and his friends Adam, Steve, and William were finally prepared for the night and headed out. They always made sure to be out as soon as possible. “We better get some good candy this year or I’m going to lose it.” said Will. He was always complaining about the candy he got even if it was full bars. “You say that every single year,” Adam said. Will and Adam are brothers so it makes the complaining 10 times worse for everybody else.

John and Steve seemed to be the only sane ones during Halloween. If you don’t count after they’re done shoving candy into their mouths and losing their minds. When they first stepped out of the house the first thing they noticed was the fog. It seemed like there were 50 fog machines running to create how much there was.

It didn’t matter how much there was though it just made them more into the spirit. They finally started on their first block of houses. It was always the rich neighborhood first. Every house gave a full bar of candy. For them it was like heaven. But this year there were only the mini candy bars.

Adam gave a glare to Will before he could even think about complaining. This happened at every house. All of them getting more and more confused about what was going on. In their 10 years of trick or treating this had never happened before. John was finally brave enough to ask them what was going on. “All of the full candy bars were just completely gone, just disappeared,” said the owner of the last house on the block. Will looked at them in disgust.

Whenever they were leaving the block Adam noticed something different. “The fog,” he said. “The what?” Will responded. “The fog, it’s gotten thicker.” Adam snapped. As they went through the fog the noises of the kids seemed to fade away but the ground they were walking on stayed the same.

Then the noises started. It was a loud ringing noise with a weird type of growling mixed in. John was the first one to realize this was not a safe place to be. But it was too late they were too far into the fog. Will was the first one to drop. Adam ran to his side. He was terrified when he saw his own brothers face start to melt.

Then it was Adam. His face did the same until he was just a pile of bones. John and Steve tried to run. But they never found anything. The only thing they could see was the ground and each other. Then the fog grew so bad they could only hear each other’s screams as they melted away.
2nd place
The Man at Night
by Joshua Hartley
It is 11:32 P.M. when I look at my phone to see the time. I ate pizza rolls that night. I  was going to let my dogs in from being outside and was going to put them in their pens when I heard it. It was footsteps coming from the basement. My parents left me alone that night because they had a business trip and I had school.

There was no one I had known of to be in the house besides me. I was scared because it was my first night alone. I was confused. That’s when I realized someone was in the basement. I looked and it looked right back at me.

Its eyes were bright yellow so I thought it was a human. I asked it what it was doing. No response. I went up the stairs and turned the light on. It had followed me. I turned around and it was right next to me. It was very tall, probably 7 feet tall, but it was hairy. I couldn’t tell what it was because it was so hairy. I ran and I thought about what it was.

It had not  seemed to be chasing after me. I could not hear footsteps, but every time I turned it was right there. I had probably run around the 1st story five times when I stopped. I said, ¨Why?¨ It spoke. It said, “I put my costume on. I was supposed to be a werewolf, but then something transformed me and now I am this.¨

I asked him if I could cut his hair. He said, ¨yes.¨ But when I turned on the trimmers, he ran. I yelled to him that it was to cut his hair. He stopped. He let me cut his hair. Every time I would cut his hair, it would grow back almost instantly. At one point I touched his skin. He started to attack. First he bit off my arm. Then he ran off. I was left to die and bleed out. I couldn’t move because he had stepped on my leg. I thought about it and didn’t want to move. So I stayed there bleeding and bleeding and bleeding until eventually, I died.
3rd place
Timmy’s Terror
by Brenden Whiteman
Once upon a time there was a boy named Timmy. Timmy was an 11 year old boy who loved books. His mom had left earlier that day to go grocery shopping so he was home with his 16 year old brother who’d left with his friends. His brother told him not to tell his mom, for he would get in a lot of trouble. He had promised to not tell as long as he got 5 bucks, his brother agreed.

He was reading a book when he heard his name from downstairs. He decided to go downstairs to see who it had been. Was it his brother and he had just got home? He thought he would’ve heard him. He went downstairs and on his way got the vase that was sitting on the hall table. He walked downstairs slowly holding the vase up high.

He heard footsteps. He hugged the wall in terror trying not to breathe too heavily. He turned the corner, eyes closed, vase held high, nothing. He opened his eyes and it was just the TV. He put the vase down, turned the TV off and went back upstairs.

He continued reading, still terrified. Then he heard it, a terrifying scream. He lived in the middle of nowhere, fields everywhere. He ran downstairs, into his dad’s room. He searched the room frantically for a weapon. He found the safe with the 9 mm, 22, and 12 gauge. He didn’t know the pass code. He searched for it. He found it in the stand next to his bed. It read “6543” he typed the code in quickly. He grabbed the 9 mm for it was small so he could hide it and it was easy to reload. He walked outside holding his gun up.

He looked everywhere, saw nothing. As he was going back inside he heard it again. He turned around quickly, it came from his woods. He started to walk towards the barn in the garage. He saw the garage door move. He was scared to death but still walked towards the barn. He was at the door. He opened it slowly. He started walking in between the tractor and semi. Then he stepped on something squishy. He looked down and saw it. It was just dog poop, but his dog couldn’t get in the garage. When he looked around some more he saw a giant coyote. It sprang at him and he shot the gun.

He pushed the dead animal off his body. He still didn’t know what made the scream. He got up and looked around some more. He then saw pieces of what looked like a rabbit. Still terrified he went inside and found the home phone and called his dad who was harvesting the corn for the winter. He whistled for his dogs to make sure they were fine. They came running and so he called his dad. His dad got home an hour later and inspected the crime scene. He confirmed the dead animal was a rabbit but while he was inspecting the coyote he saw an unfamiliar mark.

His dad said it had looked like a wolf mark he saw while he was on vacation. The one problem was there were no wolves where he lived. They heard rustling in the office room. His dad walked back there to see what it was, 9 mm in his hand. He slowly opened the door and a giant wolf-like animal jumped out and attacked Timmy’s dad. Timmy stood in fear. Then the giant animal jumped at him.