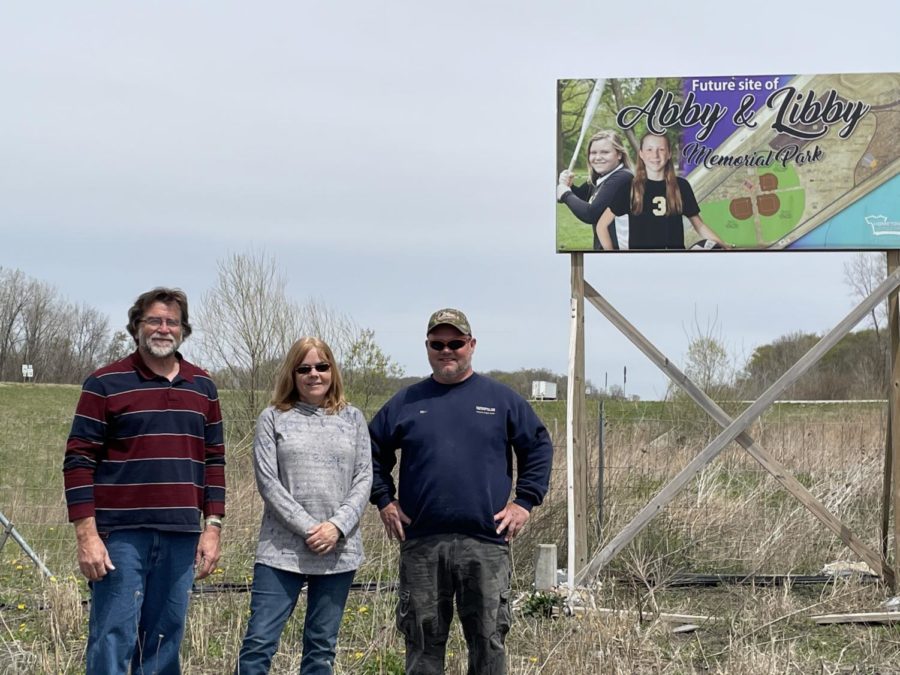 Eric and Diane Erskin and Mike Patty standing in front of the Abby & Libby Memorial Park on its way to construction.

The Abby and Libby Memorial Park started construction in spring of 2018 after the idea got tossed around from Mike and Becky Patty (Liberty German’s grandparents) to Eric and Diane Erskin (Abigail William’s grandparents). Soon after the girls were found, donations started coming in. “I didn’t want the money,” said Mike. What he wanted was a special way to honor the girls. They both loved to play softball. Mike explained, “After the softball fields flooded in 2017, I mentioned to my wife that it sure would be nice to build a field that doesn’t flood. And that’s kind of how it got started.” As Diane explained, “Mike and Becky came over and said, ‘You know, we should do something really, really memorable. What do you think about building a softball park?’ We said, ‘Great!’ and now here we are!” The project is possible due to the many donations of money, time, and services from people near and far.

While construction is not finished, a lot of progress has been made in the past three years. As of right now, one playground is complete and workout equipment is put in, all wheelchair accessible. On top of that, they have trails leading through the woods. Picnic tables and benches have been ordered. Even though it seems like so much has been done, there is still a lot longer to go on this timeline. Buildings need to be finished still, but it’s come a long way. Eric and Diane Erskin admit that it’s been a roller coaster. It’s hard to set a date on the calendar as to when construction will be done.

Another reason why it is  difficult to pinpoint an exact date for the park to be finished is because the majority of the work being done is by volunteers, both from the families of Abby and Libby and members of the community. Because of this, some projects have been put on hold for the park as they wait for the volunteers to become available. Sometimes it is frustrating to wait, but in the end it is worth it. “Waiting [for volunteers] allows us to do more for a lot less money. There were times where we could have thrown the money in one direction and had things done sooner, but then we might have only gotten to do ⅓ of the work. We have to be patient.” Eric did add that while their first goal is always to find volunteers, sometimes there are certain tasks that require professional labor.

While they would have liked to have had the park open by now, things are looking hopeful for this May, even if the lighting around the fields won’t be done by then. The work will be ongoing, but there is no doubt progress has been made, and progress will continue. As Mike Patty said, “We’re going to have a good Memorial Park for them.” Those working on the park are trying to encompass as many of the girls’ hobbies into the park as possible. Besides softball fields, an amphitheater has been built in hope of having concerts there in the summer.

While the park is bigger than originally planned, the goal has not changed. And it goes beyond just providing a memorial for the girls. “It’s not just to honor their memory,” said Diane Erskin, “it’s so people like you can bring your kids someplace really nice one day and their little cousins and nieces and nephews if they have them, can come some place that’s fun, beautiful, and active. And they can have a good memory, kind of help take away some of the bad ones.”

If you are interested in looking into the park further or would like to look at the events and fundraisers, you can check it out on the official website: https://abbyandlibbymemorialpark.org/