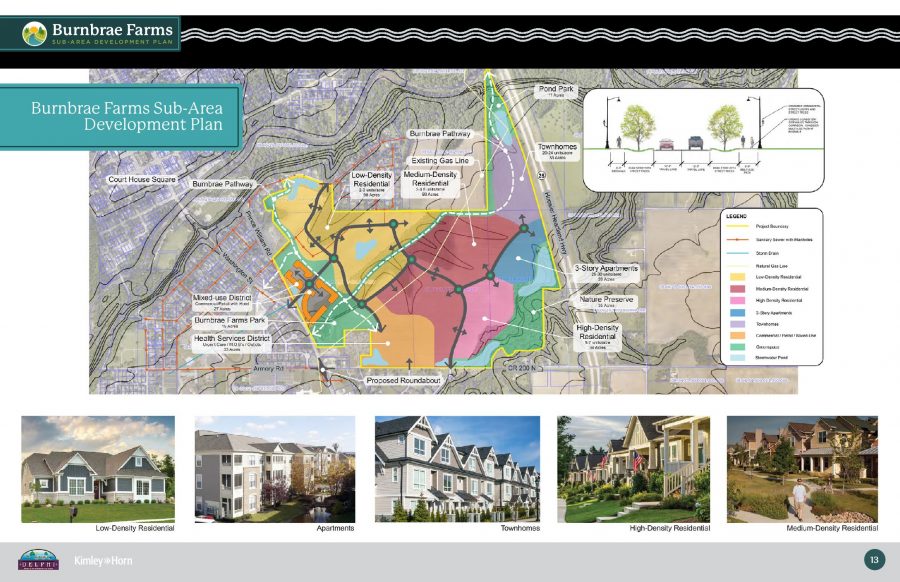 Kimley Horn created the plan for the Burnbrae Farms Addition. It includes seven different sub-areas across 275 acres of land.

The City of Delphi has a plan in the works to build a new housing addition on 275 acres of land between Prince William Rd., Riley Rd., CR 200 N, and the Hoosier Heartland. If the plan succeeds, Delphi could find itself home to hundreds more residents over the next 25 years. The development, called the Burnbrae Farms Addition, still has many obstacles to face in order to be adopted, including two board votes and a land auction.

The Burnbrae Farms land has been owned by the same family since the 1850s. In the 1800s, the land was used for breeding Burnbrae cattle. The farm was well-known throughout the country. Since then, it has become farmland used for corn and beans. Now, the City of Delphi is hoping to attract investors to the land.

The Burnbrae Farms Addition is currently in the planning stages with the company Kimley Horn. In the past, Kimley Horn worked on plans for the Wabash River Greenway, a trail project with Logansport, which led Delphi to be interested in their services. According to Delphi Mayor Anita Werling, “They have been very engaged with our community in trying to create some enhanced trail opportunities.”

Although it might currently seem unlikely that hundreds of people might come to Delphi, given the opportunity, they could come here for jobs. According to Indiana Packers Corporation, the company could still use about 400 more employees. Many of the teachers in our school corporation travel from nearby towns to come to work. With additional housing, people who work in Delphi could move here.

With the development, some space would be set aside for different types of commercial use. One such use would be the addition of a hotel to our town, which would allow a place for people to stay who are visiting for graduations, weddings, class reunions, the Wabash and Erie Canal, the Opera House, or any other manner of event. The addition of a hotel would let visitors stay in Delphi rather than at hotels in Monticello or Lafayette. As Mayor Werling stated, “This would be a big opportunity for our community, bringing people in from the outside. This would build on the strengths of our downtown area and would benefit our local businesses.”

An exciting part of the plans for the development are the addition of new trail systems. In their design plan, Kimley Horn thought to include two new trails. The trails would connect the end of the Monon High Bridge Trail back to the town by the high school. It would also connect the trail behind Riley Park to a spot near the high school. This would add to Delphi’s existing nearly 14 miles of trails.

The city is currently working with the Delphi Redevelopment Commission to establish the area as a residential TIF district. The commission could then help fund infrastructure for the housing development, which would include basic necessities such as roads, waterlines, sewers, storm water drainage, and even broadband internet service.

A residential TIF is the shorthand way of saying tax increment financing on residential land. A residential TIF is a way of helping developers finance their urban development projects. A TIF freezes property values for a set amount of time so that taxes on the land don’t increase for a developer. Oftentimes, the values freeze for around 20 years. Normally, property value increases when it is rezoned for urban development instead of agricultural use, but due to the TIF, it wouldn’t increase until the developer’s bonds were paid back.  While commercial and industrial TIFs are common, residential TIFs have only been used on a few occasions in our whole country, and Delphi has three different sites where they want to attempt to implement them.

Before a residential TIF can be adopted, it has to pass through multiple boards. The overruling one, however, is the DCSC school board because the state has mandated that the school has the final say. According to Kirk Schwarzkopf, the president of the board, “We are in support of [the plan], but we just don’t want to approve it and then receive nothing out of it, so we are in the process of negotiating with the city on their use of the residential TIF.”

Currently, the use of a residential TIF is one of the most controversial points in the housing addition plan. When using a residential TIF, community taxing units, such as the school, continue to receive the same amount of money as if the land was still farmland, while getting an influx of new members. In the case of the school, this could mean a hundred new students without the increased tax benefits a hundred students should bring. This could cause problems when it comes to buying new computers, books, buses, and other things necessary for the school to run. As Schwarzkopf stated, “With increased enrollment, we have to have more things, like buses and teachers, and we need a tax dollar support base for that.”

The Burnbrae Farm Addition might seem unnecessary to some who think the town should stay as it is. After all, the town has stayed the same size for nearly 100 years. However, according to Mayor Werling, “It will come down to a matter of trust that the city is making the right decisions for the future. Without the development, we are stagnant. With growth comes more people for the downtown, the schools, the tax load, and more people experiencing and adding vibrance to our community.”