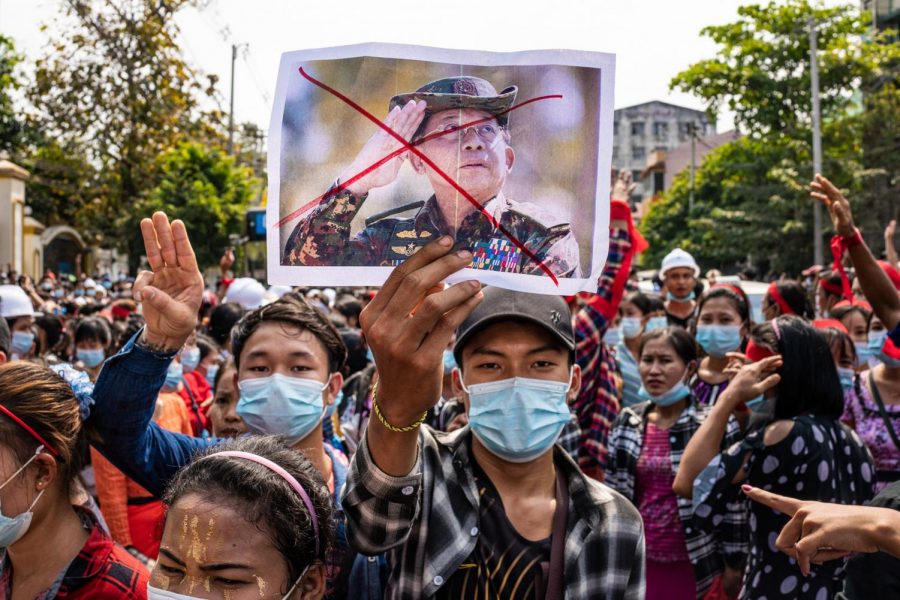 On the morning of Feb. 1, 2021, a coup d’état (which is defined as a sudden, violent, and illegal seizure of power from a government) occurred in the Southeast Asian nation of Myanmar, in the nation’s capital of Naypyidaw. This seizure of power was perpetrated by the Tatmadaw, which is the military force that serves Myanmar.

The Tatmadaw seized governmental powers due to widespread claims of election fraud against the democratically elected officials of Myanmar, and took control the day before these officials were due to be sworn into their electoral offices. The allegations of election fraud are thought to be largely unfounded. Most notably, State Counsellor of Myanmar and Minister of Foreign Affairs, Aung San Suu Kyi, was detained and put under house arrest by the Tatmadaw. Her detention is due to the allegations of election fraud, as well as the action of importing walkie talkies into the nation without proper paperwork. These offenses and their punishments are thought by many to be nonsense charges used by the Tatmadaw to imprison critics and rivals in order to silence them. The internet was also briefly disconnected so as to stop the communication between citizens and the outside world, or to silence criticism.

This seizure of power is a quick turn of events from previously established democratic governing, which commenced in the 2010’s after a long reign of military junta and martial law. Aung San Suu Kyi and her family were large factors in creating the democracy, through protests, previous imprisonments, and party leadership. Although Aung San Suu Kyi has drawn criticism in the past due to her actions against the Rohingya Muslim ethnic minority of Myanmar (of which she falsely denied the Tatmadaw’s involvement in the ongoing Rohingya genocide and denying them citizenship), many world leaders around the globe have expressed their outrage at such an unexpected and violent event.

In particular, U.S. President Joe Biden has reinstated previous sanctions (or economic and financial punishments against a nation) against the Myanmar military generals who directed the coup and detained government officials. President Biden calls for the release of the detained officials, and for the military to relinquish power in Myanmar. He has also froze all U.S. assets and funds that could potentially benefit the Burmese government from being accessed by the leading generals. The President has denounced the coup as “a direct assault on the country’s transition to democracy and rule of law” when the military seized power from the civilian-led government.

Critics have also noticed parallels between the coup in Myanmar on Feb. 1 and the attempted coup on Jan. 6 in the U.S. capitol of Washington D.C. This is particularly evident in regard to the claims of election fraud (both with no evidence for such claims and the winning candidate winning in a landslide in both elections). Additionally, although such claims are unproven as of yet, many speculate that the Tatmadaw witnessed the attempted coup in the U.S., and gained inspiration from the citizens who tried to overthrow the government and overturn a democratic election.