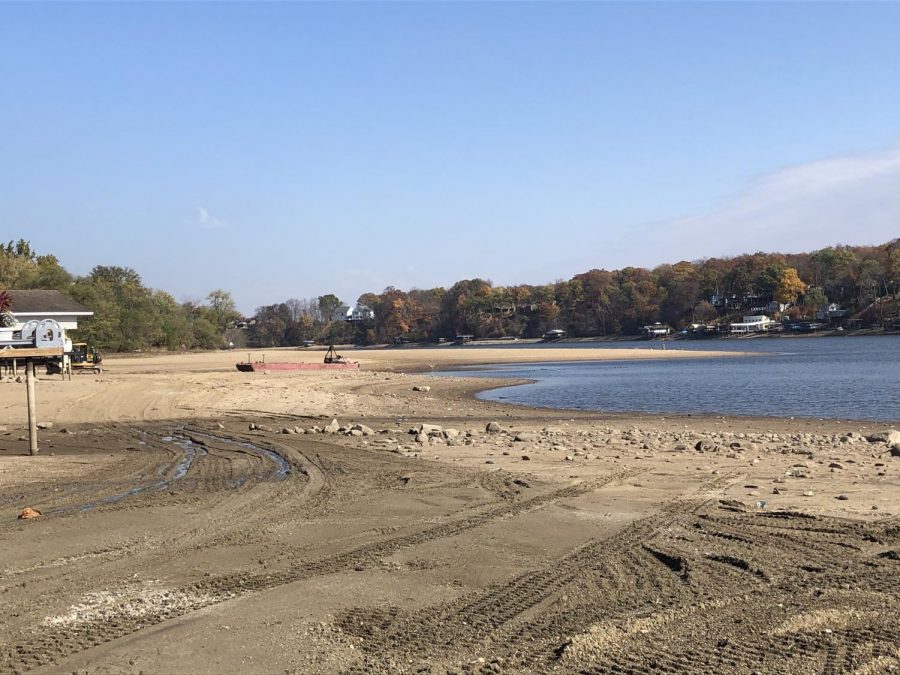 A ten foot drop in water has caused large expanses of the lake bed to visible.

In early August, the Oakdale Dam, which releases water from Lake Freeman into the Tippecanoe River, began letting more water out of the lake than was coming into it. Now, a couple months later, Lake Freeman is down over ten feet, and it is still falling, leaving lake residents and businesses to face the consequences.

Back in 2012, the United States Fish and Wildlife Service declared that NIPSCO had to release enough water from the Oakdale Dam daily to simulate the natural flow of the river. The reason for this was that an endangered species of river mussels lives in the Tippecanoe River. If the river gets too low, the mussels die. In an effort to protect this endangered species, Lake Freeman has been lowered seasonally for the past eight years.

In years past, people with property on the lake have been warned before the water level drops. This is, of course, so they can take boats, waverunners, and other water sports equipment off of the lake and their docks, as to avoid it being stranded all winter. However, this year, people were not warned. John Gasser, a DCMS math teacher, has a boat still stuck on his boat lift. “I remember the last time we were on the lake and thinking that the water was a little low. I had no idea that we were going to lose 10 feet or I would have taken my boat out then,” he stated.

Aside from residents, the drop in the water level has also had major effects on local businesses that were already suffering from losses due to COVID-19. One of these businesses is the Sportsman Inn, a restaurant on the lake. Between the pandemic and the drop in the lake level, the restaurant has lost much of its business, as they catered to people who would park their boats at the restaurant’s docks and come eat. “It’s been quite horrible. Even with a great day, the sales are still lower than they would be with open doors and a full lake,” stated George Wade, the restaurant’s general manager. To add to this stress, the Sportsman Inn’s seawall partially collapsed, which is a problem that can’t be fixed until there is water back in the lake.

The Madam Carroll is another small business that is suffering because of the lake being down. The last cruise that the boat took was on Sept. 5, when the lake was down nearly four feet. Now, they have had to move the boat nearly 25 feet from the shore to keep it from hitting the lakebed. According to Chris Peters, the owner of the Madam Carroll, “We are doing well because of local support, but we are in survival mode.” Before the season started, COVID took away half of their cruises, and now, with the lake level, they can’t do cruises at all. Instead, they host bands and parties, but stay in one spot.

In September, concerned citizens and property owners along the lake gathered at the White County courthouse in Monticello to protest the low lake levels. The rally was attended by over 200 citizens and three state government leaders. Many lake residents did not think it was fair that Lake Freeman was taking the brunt of the drought, while Lake Shafer and the Tippecanoe River were being protected. According to John Gasser, “The main goal of the rally was to put some pressure on the Wildlife division and Washington DC to change their ruling about lowering Lake Freeman to protect endangered species on the Tippecanoe River.”

While the community rallied, the Shafer Freeman Lakes Environmental Conservation Corporation (SFLECC) took the issue to federal court. The case was heard in the DC Circuit Court of Appeals on Oct. 5. However, since it is a federal court, there is no time limit on their decision. “The decision could be tomorrow, or it could be in ten months, so we don’t know if it will be helpful,” stated Amanda Walts, an employee with the SFLECC. After all, they have been battling this situation for six years unsuccessfully. With the court case being unresolved, the SFLECC has decided to keep their options open. They are constantly in contact with state officials, and Senator Braun was able to bring up the situation in an Environmental and Public Works (EPW) hearing on the Endangered Species Act.

As late as it is in the year, it is highly unlikely that lake residents and businesses will see any benefit from decisions made. To many lake residents, the hope is that this will be resolved before next spring. Chris Peters said it most succinctly, “The best thing that could happen is a federal department like the Fish and Wildlife Service to come down and find a way to fix this, because right now it’s just a failed experiment.”